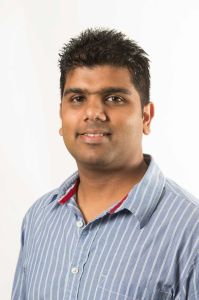 The Bosch Holdings Young Engineer of the Year Award for 2014 goes to Meethan Gokool of Bosch Projects.

Noteworthy projects on which he has worked include the Ubombo Factory Expansion and the Humbe Refined Sugar
and Ethanol Plant Projects, both as a Lead Engineer. He is currently working on the Nakambala Mill Expansion Projects as Lead Engineer.

In 2008 Meethan designed a materials transportation mechanism for the new Durban Harbour Tunnel, which incorporated various technological advancements in the field of winch system design and cable control. The design of this system went on to win a CESA Engineering Excellence Award the following year.

The Young Engineer Programme is in its second year and involves intensive development and mentoring of a young
(under 35 years) professional engineer in Bosch for a 12 month period. This is a key part of our Bosch Value Statement.